Ocean Tides and the Moon

Many years ago, a physicist friend extolled the potential of tidal power that were being explored in projects that he was working on. Though it was very interesting and produced research results and scientific papers, at that time in the 1970's there were no practical results. Now it seems, there is something happening.

"Marine power has long been a tantalizing prospect for energy researchers. Tides are much more predictable than wind or sun....

Still, companies here have found that harnessing wave and tidal energy isn't easy. Any device must be tough enough to withstand the sea's constant movement, including what one developer here calls its "horrendous storms." Maintenance is a constant challenge. 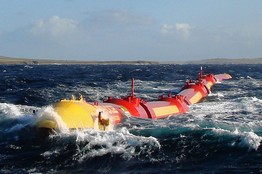 The ups and downs of the Pelamis sea snake's segments turn wave motion into power. Pelamis

'People say this is not rocket science," says Neil Kermode, managing director of EMEC. [the European Marine Energy Centre in Orkney Scotland, a grid-connected, renewables-research facility capable of testing both wave and tidal technologies.] "No. You fire a rocket into a nice, cold vacuum. We're trying to do things in a salty, grit-filled electrolyte that's got animals in it.'


Near Hoy, in the island group's southwest, a wave device owned by Pelamis   has been brought into the harbor for maintenance. The device, a series of large, rocketlike tubes, resembles a giant red and yellow sea snake swimming over the ocean surface. As the sections of the snake, connected by joints, rise and fall, they push and pull connecting pistons, producing power from the sea's movement.
Undersea cables from the Orkney shore connect to the Pelamis device—and others—transmitting the power to EMEC, which owns a substation connected to Britain's national grid."

For a detailed report on developments in wave and tidal technologies which make use of this renewable non-polluting source of energy, see the article cited below: