Here is an interesting news report you may have missed. What forces are at play here? Who supports and who resists?

"A pair of brick pillars, with an uncanny resemblance to feet, appeared late last year where a giant Buddha stood here.


The pillars were meant to hold a platform that would prevent rocks from falling on the heads of visitors to the Bamiyan site, where the Taliban destroyed two ancient Buddhas in 2001, horrifying the world.

The pillars' construction had an important consequence: it sparked a global debate on whether the two sandstone Buddha statues, cut out of a mountain face dominating this central Afghan city, should rise again.

Until now, the prevailing view among cultural experts was that the sites of the ancient Buddhas should be kept as they are: empty, a reminder of their tragic history. Islamist radicals blew up the statues as they tried to stamp out the reminders of Afghanistan's pre-Islamic past. 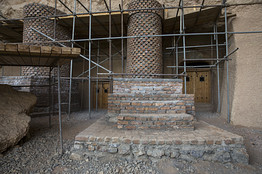 A pair of brick pillars, resembling feet, were built last year where one of the giant Buddhas stood. Photo by Paula Bronstein
But now, the United Nations' cultural agency, the Afghan government and heritage experts are increasingly open to reassembling at least one of the Buddhas, which once towered 174 and 115 feet over the Bamiyan valley.

"Fortunately or unfortunately this happened," said Masanori Nagaoka, who is in charge of cultural affairs at Unesco in Afghanistan. "And it opened a box. I wouldn't quite call it a Pandora's box, but it opened a box."

To the surprise of many, calls to rebuild the mutilated monuments have grown louder in recent months. The Afghan government has asked the World Heritage Committee, which is responsible for the site's listing, for feedback on whether restoring one of the Buddhas is possible.

Civil-society activists already plan to raise money for the statues' reconstruction through public donations once it is approved. 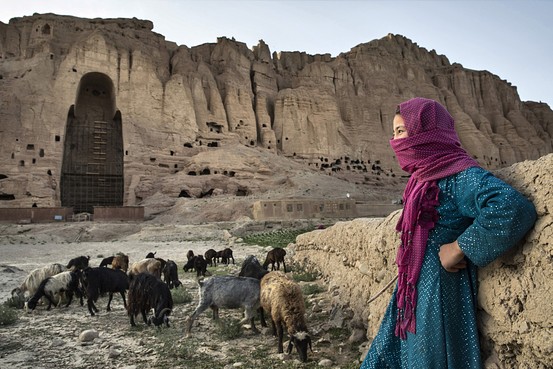 A girl watches her flock of sheep and goats grazing in front of the site where one of the Buddhas of Bamiyan once stood. Paula Bronstein for The Wall Street Journal"

For the full article by Margherita Stancati see

Posted by Elihu Genmyo Smith at 7:24 AM