TREE (Enlarge if you can) 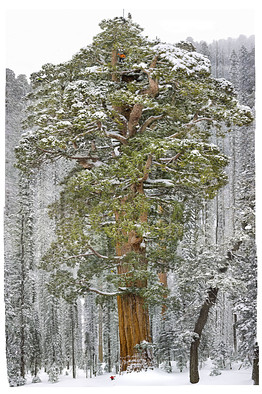 "When the giant Sequoia nicknamed the President was a sapling, the Hittite Empire was crumbling and Troy was still standing. More than three millennia later, its cinnamon-colored trunk is long enough to skewer two blue whales laid tip to tail. But the President isn't even the tallest, the oldest, the widest or the largest in terms of trunk volume (the measure most commonly used in dendrology) of the treasures in California's Sequoia National Park, which includes the biggest trees on Earth. Instead, the President holds the record for world's largest crown, with some two billion individual needles. Michael Nichols's remarkable composite image (above) shows the President in all its glory. The photographer assembled this wintry centerfold from 126 individual images taken using three cameras hoisted by pulleys from another tree. It took him three weeks to make, despite the tree's immobility. The tiny scientists climbing amid the foliage give a sense of the President's towering scale. Though slender in profile, it
has branches long enough that the figure at top, who stands on a limb that extends toward the camera, appears larger than the one on the ground. Mr. Nichols's photo spans two pages in 'Wildlife Photographer of the Year: Portfolio 23' (Natural History Museum, 160 pages, $39.95), a volume mostly devoted to more dynamic forms of wildlife from around the world....."